Blow up the CRA and start from scratch

The Community Reinvestment Act was enacted in 1977 “to address inequities in access to credit for low- and moderate-income individuals and communities.” The law should be repealed and replaced. Like hanging a crystal chandelier in a lean-to shack, any efforts to revise the law are a waste of time. This especially includes efforts proposed by the Federal Reserve Board “to strengthen the achievement of the core purpose of the statute, and to adapt to changes in the banking industry, including the expanded role of mobile and online banking.”
The increase in financial institution-induced harm, including environmental damage, demands a different, more honest and authentic approach in reviewing CRA’s inability to facilitate access to banking services and credit. This is especially true for African American, Black and, separately, low- and moderate-income individuals and communities.

The Fed, the Federal Deposit Insurance Corp. and the Office of the Comptroller of the Currency have long cited phantom CRA progress. The law has failed to reduce anti-Black racial discrimination in financial services, to lower poverty or to lessen environmental destruction.
Black-white differences in wealth, income and life expectancy have not significantly improved over the past 50 years.  Indeed, one confirmation of this is the fact that domestic food insecurity has been growing in African American and in low-income communities. 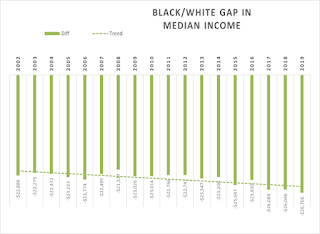 Failure to meet the goals outlined by CRA is indicative of a systemic problem that the law is ill-equipped to address. The assumptions underpinning CRA, including continual nondiscriminatory access to banking services and economic expansion as a solution for racism and poverty, have been proved invalid.

It is expedient for the Fed, the FDIC, the OCC and those employed by the CRA-dependent organizations they fund to promote a cheerful message that enhanced technology, “community benefit agreements” and financial literacy training will solve problems stemming from both poverty and environmental degradation.
Data from the agencies' own CRA reports show this is untrue.
The country and its citizens would be better off with a more coherent, clear-headed and honest assessment of the deteriorating situation. Decades of damage and loss have led us to this point.

As perhaps one of the most experienced, impactful CRA analysts I call on the board, the FDIC and the OCC to bring their approach into line with reality. It is my position that the agencies should drop the ineffective and unhelpful regulatory fig leaf of the Community Reinvestment Act. Blow it up and start from scratch.

It simply has not worked.
From: BankThink Blow up the CRA and start from scratch
By  William Michael Cunningham
June 22, 2022, 9:47 a.m. EDT
Online at: https://www.americanbanker.com/opinion/blow-up-the-cra-and-start-from-scratch