Showing posts with the label 2015 Fiscal Summit
Show all 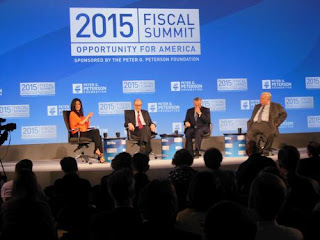 The Bureau of Economic Analysis at the U.S. Department of Commerce will release the second estimate of First Quarter 2015 US GDP on Friday at 8:30 am. Gross Domestic Product (GDP) is the the broadest measure of economic activity. Most forecasters are predicting GDP will decline by 1.0% from the earlier quarter (4th Quarter, 2014.) Our 2015 Fully Adjusted Return® forecast for GDP suggests there will be no change, in other words, we will have a first quarter 2015 GDP estimate that reflects virtually no change, or negative 0.5%."  The US economy is strong and getting stronger. The only thing that can damage it are policy mistakes (like raising interest rates too soon) by officials at the Federal Reserve, and this is reason to be  concerned.  Fed economic policymakers, especially the group at left:   MODERATOR:  BETTY LIU ANCHOR, “IN THE LOOP WITH BETTY LIU,” BLOOMBERG TELEVISION,  ALAN GREENSPAN PRESIDENT, GREENSPAN ASSOCIATES; FORMER CHAIRMAN, FEDERAL RESERVE BOARD,  RICHARD
Read more
More posts