Showing posts with the label china
Show all 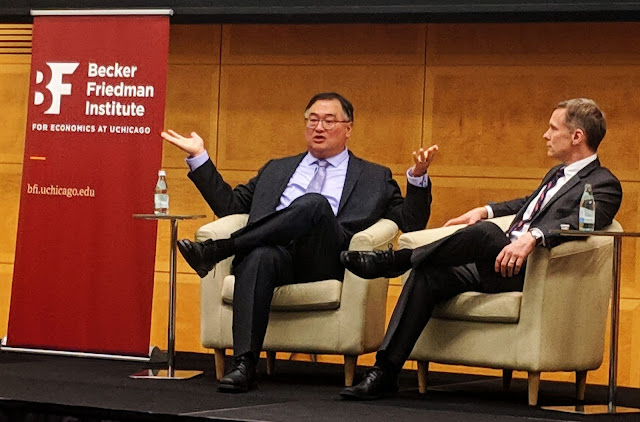 On February 25th, The Becker Friedman Institute for Economics (BFI), the Chicago Economics Society (CES), and the Booth Alumni Club of Washington, DC, held a cocktails and a conversation event titled "Crony Capitalism with Chinese Characteristics." The speaker was Chang-Tai Hsieh, Phyllis and Irwin Winkelried Professor of Economics, Chicago Booth School of Business. David Rank, former Deputy Chief of Mission and Charge' d'Affaires at the U.S. Embassy in China, moderated. Professor Hsieh discussed China’s fast-paced growth over the past three decades, stating that China's economic growth has been unprecedented, defiying economic theory. One reason for this growth is the focus of the political apparatus - communist party leaders search for investments that earn high profits.  According to the professor, China has developed crony capitalism at the local level that has promoted business development. This approach relies on the fundamental depend
Read more

The Federal Reserve’s Federal Open Market Committee (FOMC) meeting statement on March 21, indicated that the Committee voted for a quarter-point increase in federal fund rate. (See:  http://twisri.blogspot.com/2018/03/probability-of-fed-rate-hike-in-march.html ) The Fed seemed to signal, by this rate hike, that a more robust  economic outlook, strengthened, at least in part, due to fiscal policy (tax bill), provides a solid base on which to tighten (increase interest rates) monetary policy more aggressively in the future. The FOMC also sought to cling to a strategy in 2018 , according to the statement , that “ supports strong labor market conditions and a sustained return to 2% inflation .” Top  FOMC  considerations : Inflation targets and the labor market This cautious stance diverged from market expectation in a surprising way: the market seemed to expect more . The accommodative monetary policy and moderate rat
Read more
More posts