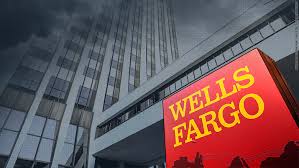 According to the Financial Times, megabank Wells Fargo & Co “has asked the U.S. Federal Reserve to remove an asset cap introduced during its accounts scandal in order to allow it to support businesses and customers hit by the coronavirus economic fallout..”

The growth cap was imposed after the bank “acknowledged that it improperly foreclosed on 545 distressed homeowners after they asked for help with their mortgages, created 3.5 million fake accounts, charged 570,000 customers for auto insurance they did not need, and illegally repossessed vehicles from hundreds of service members.” Former bank employees state that Wells "targeted black churches” and neighborhoods by offering escalating-interest mortgages, which some loan officers called “ghetto loans.”

This week, the bank demanded that call center workers come to the office despite coronavirus, but agreed to pay "all of its domestic full-time employees who make less than $100,000 a year.. a pre-tax payment of $600 and part-time employees.. a $300 bonus."

Wells suggested the Fed remove the $1.95 trillion asset cap, “which has curbed its growth and profitability since it was imposed in 2018..” In 2019, Wells Fargo reported net income of $19.5 billion.

This request must be viewed in the context of the current COVID crisis and banking industry profits. JPMorgan Chase, the country’s largest bank, reported record profits of $36.4 billion in 2019, the highest annual earnings any U.S. bank has ever reported. Citigroup announced its best results since the 2008 financial crisis, reporting $19.4 billion in profits for 2019.

Wells Fargo’s request exposes the greed and lack of public concern that is the cause of the bad banking behavior we have seen in recent years. These are simply greedy, unpatriotic institutions whose behavior now, in the midst of this crisis, borders on the psychopathic. (A Former Wells Fargo CEO wants people to go back to work and 'see what happens.' He said 'Some may even die, I don't know.' This lack of empathy is the textbook definition of a psychopath.)

The country is in the beginning stage of the most serious social and economic crisis it has ever faced. To ensure the country does not fall into depression, the federal government will need to make deposits directly into roughly 300 million banking accounts. It will have to send direct payments via new fintech platforms, like Venmo and PayPal, to reach the broadest number of citizens. Credit unions and check cashing firms will also have to be included, quickly, while avoiding double counting, and making sure that only eligible US citizens receive money.

Mortgage and loan terms will also have to be revised. We know financial institutions can do this, since it’s what they did in the years leading up to the financial crisis, when loan terms were revised in favor of the banks, in many cases without letting borrowers know. (In 2001, we helped create one of the first wide scale home mortgage loan modification projects in the United States. The project helped families victimized by predatory lending practices. See: https://www.creativeinvest.com/PropertyFlipping.pdf ) Now, the task is to reset loan terms in favor of borrowers. It is uncertain that banks can do this in a fair, unbiased manner. This is why nationalization is needed.

While privately-owned banks place “short-term profits for their shareholders as their highest priority” they are required to “maintain stability and public confidence in the nation's financial system.” Megabanks must be part of the solution, but, if a bank is primarily worried about profitability before the public interest in THIS environment, they will only make things worse.

The solution is to have the government, via the Fed, in the public interest, take over the banks.
at March 26, 2020