Showing posts with the label Santa Clara Stadium
Show all 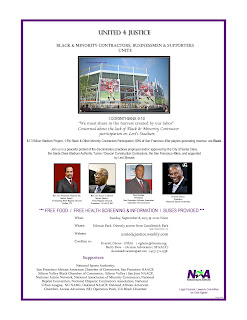 If the 49ers knew and this is true…That special legislation was passed  so that the Santa Clara Stadium Authorities could circumvent the  California State laws in regards to contractor selection when using  public funds. If the 49ers knew and this is true…That Turner/Devcon joint venture,  the contractor selected to build the stadium, submitted a list of  “pre-qualified subcontractors” and that list had NO, zero, African  American Contractors on that list. What does that say about our 49ers? That Black Players are good enough  to perform on the field but Black Business people are NOT GOOD ENOUGH  to build a stadium. 1940’s – they said we could not Play the game 1960’s – they said we were not smart enough to Quarterback 1980’s – they said we could not Coach a winning team Now in 2013 – We CAN’T BUILD a stadium ?? Forward & Pass ON, so people know there is a process that “Excludes”  folks and we’re not going to continue to let this happen. We deserve the “ Ameri
Read more
More posts