Showing posts with the label Timothy Geithner
Show all

Geithner on the Hill 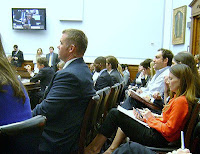 U.S. Treasury Secretary Timothy Geithner testified before the House Financial Services Committee this morning. Most of the questioning concerned the growing LIBOR scandal.  Representative Mel Watt noted the declining number of African American car dealers and asked if there was anything Treasury could do, given its large holding of GM stock, to reverse this situation. Rather than giving a solution, the Secretary promised to get back to him.  We suggested a solution as far back as 2008: there is nothing to stop Treasury from filing a shareholder resolution with GM on the matter.  On LIBOR, Representative Scott Garrett (R-NJ) noted that " Geithner had four years, and meeting after meeting, to bring the LIBOR issue to Congress' attention and it just wasn't done. " Mr. Geithner appeared unflapped . He has, after all, done this before. He noted, in prepared remarks, that “The American financial system has regained its footing since the crisis of a few y
Read more

- July 10, 2009
At 10:00 a.m. on Friday, July 10, 2009, in 1100 Longworth House Office Building, the Full Committee of the House Agriculture Committee and the House Financial Services Committee conducted a hearing titled "A Review of the Administration’s Proposal to Regulate the Over-the-Counter Derivatives Market." Timothy F. Geithner , Secretary, U.S. Department of the Treasury, was the only witness. The hearing began with a consideration of the risk to taxpayers from the over the counter derivatives market. According to Wikipedia , "Over-the-counter (OTC) derivatives are contracts that are traded (and privately negotiated) directly between two parties, without going through an exchange or other intermediary. The OTC derivative market is the largest market for derivatives, and is largely unregulated with respect to disclosure of information between the parties, since the OTC market is made up of banks and other highly sophisticated parties, such as hedge funds. According to the Ba
Read more

Plan to restore stability to "our" financial system

- February 10, 2009
Today, Treasury Secretary Timothy Geithner introduced the Financial Stability Plan . Our comments below: The main features are the creation of: a. the Financial Stability Trust b. the Public-Private Investment Fund c. the Consumer Lending Initiative d. the Foreclosure Prevention Plan e. the Small Business Lending Initiative The Financial Stability Trust is a "Capital Pool" designed to serve as a buffer to help absorb losses. (Funny, we proposed the same thing for community banks in an application we submitted to Treasury for New Markets Tax Credits. We were not, however, funded. Looks like we need to be, well, non-minority..and to have caused massive damage to the global economy in a thoroughly unethical way. But I digress..) This is a rebranding/repackaging of the current Capital Purchase Program (CPP). In fact, all bank investments made over the past few months will be held in the "Trust". As part of this "Pool", banks over $100 billion will have to
Read more
More posts