Showing posts with the label US Treasury
Show all 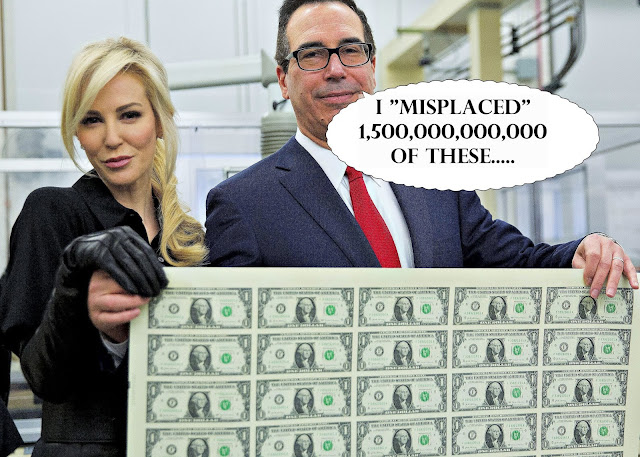 In an interview on Fox Business News , the current Secretary of the Treasury, former Goldman Sachs partner Steven Mnuchen, indicated that $1.5 trillion worth of $100 bills recently "disappeared." In explaining how this money vanished, Mnuchen said: "Literally, a lot of these $100 bills are sitting in bank vaults all over the world." This explanation is beside the point and impossible to verify, of course, making it highly unlikely to be true. Mnuchin, you will recall, came to Washington with a firmly established reputation for unethical behaviour . In 2009, he took "over California’s IndyMac bank, shut down amid the 2008 foreclosure crisis by the Federal Deposit Insurance Corporation (FDIC). Bought for $13.9 billion (but only $1.3 billion in actual cash), Mnuchin turned it into a genuine foreclosure machine" and became known as the Foreclosure King. His bank "carried out more than 36,000 foreclosures , tossing former homeowners (including a
Read more
More posts