When discussing some of the America’s most innovative cities and areas, Washington DC does not immediately come to mind. Despite serving as our nation’s capital and being home to the world’s most powerful government, DC has been known to lag behind other metropolitan areas in the tech space. In an effort to showcase some of the exciting progress being made around the District, Atlantic Magazine teamed up with The Microsoft Innovation and Policy Center to co-host The Game Changers, a two-part discussion panel led by Washington Editor-In-Chief Steve Clemons. The event was underwritten by Microsoft. Videos of the discussion can be found here.

The first part of the discussion focused on sourcing innovation and comprised of 3 speakers:


These three served as excellent examples of the unique ways to becoming a leading innovator. Though each speaker had very different backgrounds and expertise in the tech space, they all shared one thing: experience with capitalizing on disruptive technologies.

When discussing the role of business in society, Ms. Grayson described how, despite functioning as a for-profit venture capital firm, New Enterprise Associates is able to be socially impactful. By operating a portfolio driven by global investments in technology and healthcare, NEA is able to fuel the spread of innovative ideas and transformative technologies. With seven offices and investments made in ventures all across the globe, Dana believes there is opportunity to innovate in a variety of places.

Similarly, Mr. Scranton believes that by using virtual reality to provide valuable insight in a planning and design context, IrisVR is able to differentiate itself as a tool rather than as a gimmick. According to Scranton, the flow and progression software that IrisVR utilizes aligns well with the rise of spatial technology and its potential to become apart of daily interactions with things like our kitchen and car.

Last but not least, Maria Rose spoke about her non-profit communications platform for emergency food distribution. Using her background and childhood experience working in local food pantries, Ms. Rose was able to realize that there was a massive disconnect within the food supply network. By identifying a fundamental problem and what was missing, She was able to use state-of-the-art technologies such as Ruby on Rails to create real results: recovering 250,000 pounds of food across a integrated network of 48 states. By using an innovative, market-based approach, Ms.Rose was able to accomplish this impressive feat as a junior at American University and monthly budget of $4000-7000. 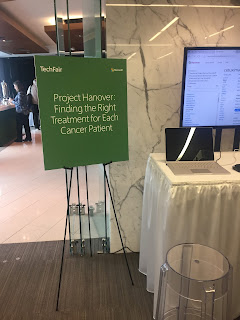 The second part of the panel consisted of a conversation between Mr. Clemons and Representative Will Hurd (R-TX) on modernizing the government. To begin the discussion, Hurd emphasized how Congress has recognized the value of learning about things like cybersecurity, IT procurement, and coding. When discussing his work with the Office for American Innovation, a new White House Office led by Jared Kushner, Hurd asserted that many of the important changes and policies needed to improve the governments role do not have to big and flashy. For example, Hurd pointed to the potential for an interoperable electronic health record system between the Department of Defense (DOD) and Department of Veterans Affairs (VA) as a major step toward making the government more advanced. However, Hurd also believes that the government’s hand in individual entrepreneurship and creativity should be minimal, expressing his desire for easing regulatory barriers to innovation. Hurd admitted that the government does not always have all the answers and must benefit from the “brain drain” by providing the proper platform for the world’s brightest minds to advance their ideas.

Following the discussion panel, guests were invited to tour through Microsoft Tech Fair, an event used to showcase some of the groundbreaking research and technological products created by Microsoft’s Innovation and Policy Center. The open house consisted of 12 unique demonstrations focused on creating advanced technologies (HoloLens) (FarmBeats) to solve some of the world’s biggest problems such as cancer and disease (Project Hanover, Project Premonition). More news on this event and the demos can be found using the event hashtag #DCTechFair.
at June 12, 2017