“Scared to Death” - Scandinavia and the US by Austin Wu, Impact Investing Analyst, University of Maryland

On June 27th 2017, the House of Sweden, located on the banks of the beautiful Potomac River, hosted the Speakers of the Parliaments of Sweden and Latvia, the President of Parliament of Norway, along with Derek Cholett, the Executive Vice President at the German Marshall Fund of the United States, and Kurt Volker, the executive director of the McCain Institute for International Leadership, to discuss challenges in Northern Europe and how to face them in partnership with the United States.

The seminar focused on the possible withdrawal of the United States from NATO, and how the Scandinavian countries would be left vulnerable to potential military aggression and geographical expansion of Russia in the near future, should the close relationship between President Trump and President Putin hold true. One key point the speakers all agreed upon is this fact: a great nation needs great neighbors. As Russia sits in close proximity to the Scandinavian countries, the Scandinavians are all looking at the United States for continued support, both politically and militarily, to counter the existential threat that is Russia. Ināra Mūrniece, Speaker of the Parliament of Latvia, recounted her childhood, when she lived under the fear that Soviet troops would simply walk across the street to her home. She noted that it was the United States who helped countries like Latvia regain freedom and go onto become the prosperous and democratic countries they are today. However, confidence that the United States has her is diminished by the inauguration of Donald Trump: polls shows that only 20% of the younger generation in Scandinavia exhibits any confidence that the current U.S. government would assist the nations in Scandinavia should the Russians decide to invade. 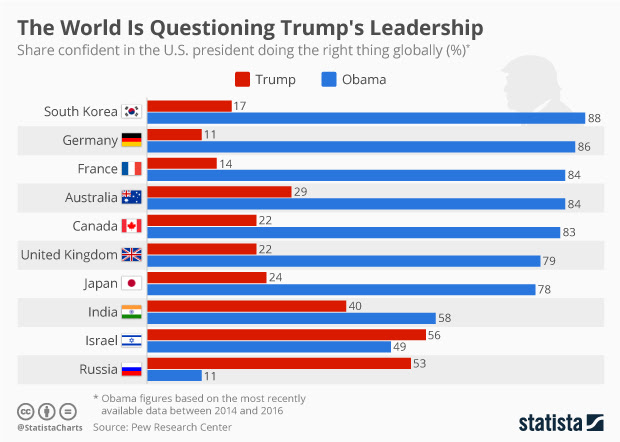 Olemic Thommessen, President of Parliament of Norway, seconded the thought: "how are we going to fight against the Russian, when Norway only has 5 million in population, while the Russians are building fleets and airplanes every day?" He repeated the phrase “scared to death” multiple times to illustrate how terrified Scandinavian countries are about the current situation. They fear the United States would quit NATO and would no longer protect them. It was awkwardly obvious that the entire seminar was focused on the petition-like discussion that the Northern European countries are sponsoring, desperate to maintain their strategic alliance with the United States.

Mr. Chollet and Mr. Volker then tried to inject a sense of calm by noting that, while Candidate Trump seemed to move  closer to Russia, during the first 6 months of his presidency, President Trumps hasn’t make any Russia-favored movements or actions. (This of course ignores the US withdrawal from the Paris Climate Accord - ed.) On the contrary, they noted, Trump's promise to sit down and talk with President Putin to resolve any conflict has not happened yet (there will soon be a face-to-face meeting between President Trump and President Putin at the upcoming G-20 meetings). Therefore, countries like Norway shouldn’t be terrified by the Trump administration. Mr. Chollet and Mr. Volker mentioned, and I personally believe that their statement accurately reflects the key attitude of the Trump Administration towards the Northern European countries: they should be prepared to help themselves and to bring a plan or solution to discussions with the United States, rather than being panicked and asking for help before the Russian threat actually materializes.

After attending the seminar, I came away with a clear sense of the insecurity Northern European countries feel, and also with a clear sense of their desperation, their eagerness to maintain the alliance with the Untied States, even if the U.S. eventually pulls out of NATO. My personal takeaway from the seminar is this: a country doesn’t have a permanent friends or enemies, only permanent interests. Businessman like President Trump doesn’t offer assistance for free. The underlying words from the U.S. representatives, which could represent the viewpoint of the United States, is this: protection will no longer be free as these nations assumed it would be when they were comfortable that the U.S. was not going to quit NATO.

Alliance is necessary, but Trump's motto appears to be: you gotta give to get.