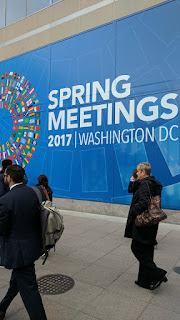 In April, 2000, 10,000 protesters gathered outside the World Bank/IMF Spring Meetings to express passionate disapproval of globalization and to express concern about growing income inequality. Chaos erupted and upwards of 1,000 people were arrested. Seventeen years later, at this year’s World Bank meetings, there are no protesters to be found in Foggy Bottom. The World Bank has attempted to incorporate some of the protesters’ concerns into their Spring Meeting event schedule: they have increasingly emphasized income inequality and other issues. This progress was displayed at the Civil Society Organization (CSO) Roundtable on April 18: CSOs posed their questions directly to World Bank executive directors. The questions were direct, opening with “How can the bank do more to provide relief in wars and other crises ?” Executive director Merza Hasan brought attention to the relief efforts of the past, but suggested there was room for improvement. The comments were in line with World
Read more
More posts