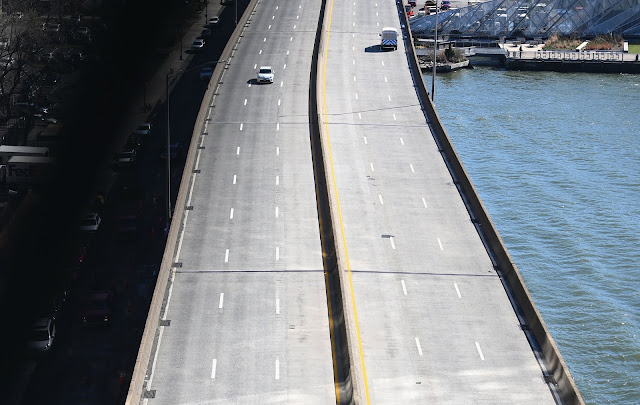 As the United States and the world continue to see a rise in COVID-19 cases, evidence of a considerable economic downturn continues to stack up.

It seems, at the moment, that aggressive social distancing measures and the resulting business slowdown are the best ways to protect the economy and to save countless lives.

Goldman Sachs economists have predicted that second-quarter GDP will drop 24% with a 3.8% contraction for the full year 2020. The bank has also stated that they expect unemployment to reach as high as 9%. In a more extreme prediction, the president of the St. Louis Fed, James Bullard, has warned that unemployment could reach as high as 30% and GDP could drop as much as 50% in the coming quarter.

While economic policy put into place so far focuses on stimulus and direct spending, there should be a heightened focus on the most vulnerable demographics in times of crisis. Despite the fact that everyone, other than essential workers, have been instructed to remain home, there are many who have outright lost their positions and sources of income.

Business closures are resulting in layoffs, as business owners and managers adjust to reducing output and to significantly less revenue. Minority group members and hourly wage workers have been most highly affected.

In a uniquely difficult time like this one, it is not all Americans who need a $1,200 check from the federal government but, for those who really need it, this amount is unlikely to be sufficient.

As economic indicators begin to show the effects of COVID-19 and predictions continue to change, more aggressive action should be taken by all levels of government to soften the effect of this crisis.
at March 30, 2020

On April 2, 2015, we issued an unemployment rate forecast that stated, in part: 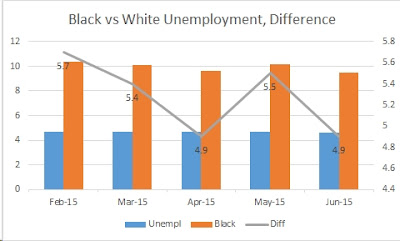 "Our Fully Adjusted Return® Model, combining social and financial data, predicts a 5.4% rate for March. Unemployment has been trending down since the beginning of 2009. The long term trend is declining, as the chart below shows. We see no reason for this to change. The only risk is that we may be a little early."

As one outlet noted, "US employers added jobs at a solid pace in June, and the unemployment rate fell to 5.3 percent, a seven-year low." Today's rate release confirms our 4/2/15 forecast.

The chart above shows the overall Unemployment Rate (Blue), the rate for African Americans (Brown) and the difference between the two. (Gray line, scale at right.) We think the level and the volatility of this difference is a key indicator of the overall social and economic health of the country.

On May 28th, we issued a Fully Adjusted Return® forecast for GDP that, similarly, was a little early. At the time, we stated that: "Our 2015 Fully Adjusted Return® forecast for GDP suggests there will be no change, in other words, we will have a first quarter 2015 GDP estimate that reflects virtually no change, or negative 0.5%." The decline was reported at -0.7% at the time, and most economists expected a rise of +0.2%.

On June 24th, The Wall Street Journal reported "Gross domestic product, the broadest sum of goods and services produced across the economy, contracted at a 0.2% seasonally adjusted annual rate in the first quarter, the Commerce Department said Wednesday. The latest figure matched economists’ forecasts." Contrary to the Journal's implication, most economists missed the turn on May 28th. By June 24th, they caught up.

We were, again, early.

Our Fully Adjusted Return (TM) Model Predicts Unemployment will be 7.7%

The U.S.Employment Situation report will be released on Friday at 8:30 am. According to the Department of Labor, "Based on the Household Survey, the unemployment rate measures the number of unemployed as a percentage of the labor force." The consensus forecast is for a 7.8% to 8.0% unemployment rate. Our Fully Adjusted Return (TM) Model, combining social and financial data, predicts a 7.7% rate.
As noted in the Washington Post, "Hurricane Sandy could complicate Friday’s release of the October U.S. jobs report, the final snapshot of employment before the presidential election. Labor Department officials are still hopeful that they can release the report as scheduled at 8:30 a.m. Friday. But they acknowledged Monday that the storm could cause a delay." While the storm may impact the report release date, it will have no impact on the report itself. The storm will influence the November jobs figures, to be released on December 7th.Recent Forecast Track RecordOur last forecast called for a 2.1% rate of growth in GDP, or gross domestic product. We said then that "forecasters estimate that the U.S. economy grew at a 1.9 percent annual rate during the third quarter, from July through September..GDP is the broadest measure of the nation’s economic activity, aiming to capture the value of goods and services produced in the United States during a given time period." GDP was released on Friday, October 26th at 8:30am.The actual GDP number reported was 2.0%.
at October 31, 2012

Our Fully Adjusted Return (TM) models predict GDP will be 2.1%.

According to the Washington Post, "forecasters estimate that the U.S. economy grew at a 1.9 percent annual rate during the third quarter, from July through September..GDP is the broadest measure of the nation’s economic activity, aiming to capture the value of goods and services produced in the United States during a given time period." GDP will be released on Friday at 8:30am.

Our Fully Adjusted Return (TM) models predict GDP will be 2.1%. Consumer spending will drive most of the growth. Housing has recovered, adding additional strength to the economy. Government spending and business investment will lag, but will be higher than expected.
at October 25, 2012