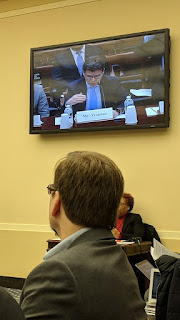 On February 14, four witnesses (an analyst in Cybersecurity Policy from the Congressional Research Service, the director of NIST's  Information Technology Laboratory, the vice president of food safety of Walmart, the vice president of blockchain technologies of IBM and the Associate Clinical Professor of Benjamin N. Cardozo School of Law) showed up in 2318 Rayburn House Office Building, to testify about blockchain technology before the Subcommittee on Oversight and Subcommittee on Research and Technology. The witnesses answered questions from members of the two subcommittees.

I attended this hearing and below are my summarized findings, in case you didn’t have the time to attend this mind-blowing hearing.

Mr. Gennaro “Jerry” Cuomo, Vice President of blockchain technologies at IBM, urged Congress and the Trump Administration to encourage innovation and implied that blockchain is ready for implementation in business and government.

Mr. Frank Yiannas, Vice President of Food Safety at Walmart, talked about how to use blockchain technology to enhance food traceability and transparency in industry.

Mr. Aaron Wright, associate clinical professor and Co-Director of the Blockchain Project at Benjamin N. Cardozo School of Law, talked about the application of blockchain in the private sector and government, and suggested that Congress create a National Blockchain Commission to ensure that continuous research, development and innovation will occur nationwide.

Looking across the hearing, I think using blockchain to address food safety issues should be the priority, since this is intimately related to everyday health and life.

It Is Difficult to Trace A Contamination Source

The reason is that many companies still rely on paper-based systems. Even if they digitize the paper, it is still be stored in separate, hard to access systems.

He recalled the 2006 E. coli outbreak linked to bagged spinach in United States. Clearly, any delay in tracing the source of the contamination in this situation could be just as lethal as the poisonous food and seriously destructive to both society and the economy.

Fortunately, most of consumers were warned, and most dodged that bullet. That was not the case for regulators and for the spinach industry, however. Regulators spent weeks tracing the source of the contamination. They had to comb through separate system to get the complete dataset. What’s worse was the dark cloud hanging over the spinach industry. It took a long time before they won back the trust of consumers.

Blockchain Can Be the Remedy 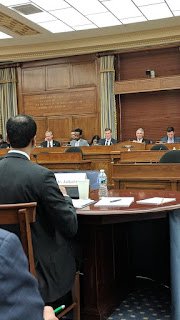 Blockchain, an open, distributed and decentralized ledger that can record and share data between two parties in a complex network permanently, transparently and effectively, may be the remedy to these types of food industry issues. With blockchain technology, production information for each food and food ingredient, such as where it is grown, harvested, processed and packaged, can be recorded in a shared, verifiable database, giving us precise food traceability.

Let’s look at the spinach example. Using blockchain technology, regulators would not need to integrate disperse databases to be able to trace the cause of the food-borne illnesses. They could do so in seconds, saving lives, time and money. Furthermore, grocery stores could quickly discard contaminated spinach once the source of the outbreak is determined, thereby avoiding consumers’ negative impressions. As a result, the entire spinach industry would avoid a large reduction in sales and production.

Food traceability will lead to food transparency as an increasing number of consumers nowadays hold high expectations. They expect to know everything about their food: where it is grown, whether it is organically farmed, and which producer processes it, not only in supermarkets, but also in  restaurants. Food transparency will ultimately become a competitive edge for whoever adopts blockchain technology. It will eliminate the anonymity, bring accountability and enhance consumers' trust and confidence in the food industry.

According to my analysis, four parties will benefit from the adoption of blockchain in the food industry:

·         Producers. Blockchain technology will help one determine the origin of damaged or contaminated  food very fast and will save consumer's trust in food producers. This, in turn, guards against  economic loss. In an outbreak of food-borne illness, all producers of the contaminated food type are on the suspect list. Currently, it takes a long time for regulators to identify the source of the contaminated food and the guilty producers. As common sense protection, customers lose trust and confidence in all relevant food and producers, and for a long time, eventually causing a decline in the productions and sales of that particular type of food. Blockchain may eliminate this.

·       Retailers. Blockchain technology will shorten the time needed to trace-back. Uncontaminated vegetable and fruit can be on sale again in a shorter period of time. This protects all retailers from a vast and unpredictable loss. Grocery stores and supermarkets are seriously and directly affected whenever there is a foodborne illness outbreak. They have to pull every relevant food from the shelves before the investigation is completed and source determined. Vegetable and fruit will start to rot if they are stored for a long time and thus can’t not be put back on shelves even if they are verified to be uncontaminated.

·       Consumers. Identifying the contamination source rapidly and effectively will help consumers who are undergoing medical treatment. Information like the type of chemical substance or bacteria will allow consumers to get the right treatment right away. This will save lives. In certain cases, finding the guilty producers will also enable consumers to quickly obtain reimbursement for medical costs.

·       Regulators. Blockchain will make the regulator’s job easier than before, help them mitigate the cost of lives, money and human resources, while maintaining strong authority. Regulators are under  considerable pressure when a food related public health incident occurs. Whether they are able to trace the contamination source in time and set plans accordingly directly influences the spread of the illness outbreak. Doing so quickly both protects the public and enhances the authority of regulators.

From my perspective, the ultimate goal of blockchain in the food industry is to establish an effective mechanism to promote the food traceability and transparency. To build that mechanism, producers need to input relevant data into the shared database based on blockchain to maintain accountability. Retailers need to manage that database effectively to ensure all data on all food on sale are traceable and accessible, and consumers have to be able to access the database to obtain details about the food they buy. Regulators need to monitor the database intently in order to be able to timely identify an illness source in case of a public health incident.

Eventually, it is my belief that blockchain technology, combined with a complete regulatory mechanism, will increase accountability, democracy and public safety in the food industry.
at February 20, 2018