New federal banking legislation,"H.R.41 - RESCUE Act for Black and Community Banks" was introduced by Congressman Bobby Rush (D-Il) on January 3, 2019.We worked, along with the Financial Services Innovation Coalition (FSIC), to draft this new legislation, which contains many of the ideas we have been working on for some time. Recently, FSIC sponsored a letter of support. To add your name, please see: https://lnkd.in/ejv9Ef6
hashtag The bill is designed to take a focused approach to saving and expanding the number of Black-owned banks operating in the US. This legislation is designed to meet the needs of the Black community, not just serve bankers. Our contributions were part of a collaborative effort in the overall national interest.The bill, which has just started the legislative approval process, contains the following provisions:1. Establishes in the Office of the Comptroller of the Currency the "Office of Black and Community Banks".2. Seeks to partially or completely exempt Black banks and community banks from Federal banking statutes and regulations, to the extent the Comptroller determines it appropriate without endangering the safety and soundness of such banks.3. Seeks to have the Securities and Exchange Commission issue regulations to reduce the regulatory burden applicable to Black banks and community banks—(i) under the amendments made by the Jumpstart Our Business Startups Act;(ii) issuing mortgage-backed securities; and(iii) issuing securities backed by loans guaranteed by the Small Business Act.4. Provides a crowdfunding exemption for Black and Community Banks under the JOBS Act.5. Reestablishes the federal Minority Bank Deposit Program.6. Expands federal agency use of Black and community banks.7. Gives specific consideration under the Community Reinvestment Act (CRA) for majority institutions that partner with Black and community banks.8. Calls for a study on the use of New Markets Tax Credits by Black an community banks.Community banks in general and black banks in particular, have suffered in the decade since the great recession. Black banks have almost become extinct with barely 20 banks left. These declines have had especially devastating effects on black communities. Black home-ownership is less now than it was in 1968, and black wealth is unchanged over that same period of time, with some predicting black wealth will be zero by 2053.African Americans are excluded, with the exception of token representation, from owning regulated institutions in the financial services industry, without access to the prosperous and dynamic activities of banking, venture capital and investing. The combined assets of all black banks were less than $6 billion as of 10/31/18 according to the Federal Reserve Board. It is well known that less than 1% of VC money finds its way to minorities and women. This is evident by the small size of black banks as compared to their non-minority counterparts. Wells Fargo has $11 trillion in assets. In fact, the 600th richest person in the world is worth over $5 billion and the 10th richest venture capital (VC) firm is worth roughly $5 trillion.Remedial action is clearly a necessity and we are glad someone with Congressman Bobby Rush's stature and history is leading this fight. Contact us for more information. To see the full text of the bill, visit: https://www.congress.gov/bill/116th-congress/house-bill/41
at February 22, 2019 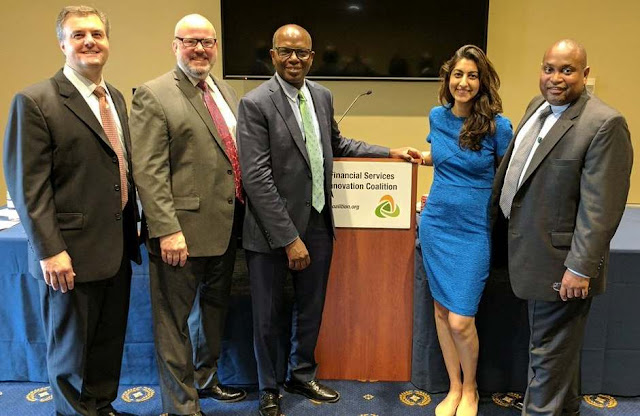 On July 24th, I attended a Branchless Banking Roundtable discussion sponsored by the Financial Services Innovation Coalition (FSIC) at the Rayburn House Office Building in D.C.

Panelists include the Co-Founder of BankMobile, Luvleen Sidhu, Founder of Creative Investment Research, William Michael Cunningham, and the founder of HBCU Wall Street, Torrence Reed. The moderator was the founder of FSIC, Kevin B. Kimble. During the hour-long discussion, they discussed issues related to the inefficiency of bank branches, the problem of bank transaction fees, and how newly developed technologies can change people’s way of banking.

Mrs. Sidhu, the founder of BankMobile, noted she designed her company to target the underbanked, millennials, and middle-income Americans. She offers an entirely fee-free checking account for each of her clients. The fee-free guarantee includes the following: no minimum balance requirement, no direct deposit requirement, no transfer fee, etc. (There is a fee when a user withdraws money from ATMs that are not owned by BankMobile.) Considering that millennials nowadays transfer money much more frequently (that is why apps like Venmo are popular among the younger generation), the free transfer feature is viewed as a major benefit.

Mr. Cunningham echoed the idea that regulations are pushing people away from using bank services. He talked about Nigerian digital money service provider ‘Paga’, a mobile banking service provider like BankMobile. With smartphone penetration rates getting higher everywhere in the world, branches will likely suffer, generating lower revenue. This got me thinking about the Wells Fargo scandal, where the bank notoriously opened 2 million fake accounts, as a clear example of why the existence of mobile banking services like Paga threaten branch banking.

Mr. Cunningham then described the Initial Coin Offering (ICO) as a way for young entrepreneurs to fund their ideas. An ICO is a way to raise startup funding (mostly Bitcoin or Ethereum) by issuing your own currency, in our case, SRI coins. Investors who choose to invest in your ICO are either: speculating the rise of cryptocurrencies, or: investing in your idea in exchange for future service from the ICO issuer. What makes an ICO so desirable is the fact that: it is totally unregulated.

Funding ideas come and go, going from venture capitalists, to borrowing money from the bank, or even asking for money from your friends or parents. These all take time, and timing is everything in creating a new business. With an ICO, you do not need to know who is investing in your business, you do not need to worry about explaining to your friends or your parents of why your business failed, if it does fail, but the most valuable factor in an ICO is it's unregulated nature. People can invest tons of money into a business with or without knowing the risks behind their investment. Although controversial, an ICO is indeed the easiest way for young entrepreneurs to fulfill their dreams. In 2016, over $1 billion has been raised via ICOs, compared to $600 million in venture capital.

After attending the discussion, I came away impressed by the progress regular people (like me) have made over the years, seeking to make our lives easier. It is because of new technologies that we can access capital in a much better way.
at July 25, 2017