According to the bank, investors include:

Prudential and American Express (full disclosure: former clients) have a 20 year track record of making these types of investments. National Community Investment Fund is a Creative Investment clone, and a bad one at that (we started seven years before they did.)

Which brings us to Goldman, who today "notified the New York State Department of Labor that the investment bank (might) lay off 230 employees." We'll see if they actually lay off people, but the investment in Carver is bound to cause some negative feedback, at least among those 230 people.

Goldman, you'll recall, has a history of investing in black-owned financial institutions: In May, 2009, Goldman Sachs Group Inc. invested $1 billion in a money-market fund managed by (African-American) Williams Capital.

Of course, Goldman has been fined $619.3 million by the SEC for various infractions.

We attended a conference titled "Diversity in Financial Services: The Impact of Dodd-Frank" held from June 22-24, 2011 at the Westin Arlington Gateway, Arlington, VA.

The speaker at General Session IV was Beryl Satter, author of Family Properties: Race, Real Estate, and the Exploitation of Black Urban America. She discussed the current state of the mortgage markets and placed recent history in context. Her book is perhaps the best exploration of race and the urban real estate market.

This is a rare and powerful book which combines socioeconomic trends, the history of the civil rights movement and detailed family history. As noted by Ms. Satter, "In the 1950’s, 85% of properties sold to blacks in Chicago were sold on contract (on exploitative terms). ..speculators were robbing blacks of $1 million dollars per day."

That’s 365 million per year. At 5% interest rate compounded over 60 years (1950 to 2010), this adds up to $135 BILLION dollars in lost wealth in Chicago's Black community. Multiply this by other urban real estate markets around the country, and the total loss adds up to well over $5 TRILLION dollars.

This explains, completely, the wealth gap between blacks and whites.
at June 24, 2011 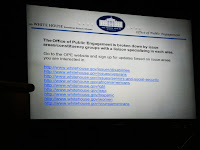 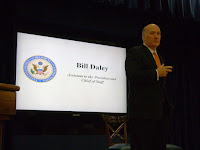 We were fortunate to be invited to today's Community Leaders Briefing at the White House. I found the event informative.
We got a chance to hear from top Administration officials. Among those addressing the meeting were Carl Shapiro, Member, Council of Economic Advisers, Greg Nelson, Deputy Director, White House Office of Public Engagement, Michael Blake, Associate Director, White House Office of Public Engagement, Stephanie Cutter, Assistant to the President and Deputy Senior Adviser, and William Daley, Assistant to the President and Chief of Staff.
Mr. Shapiro described the Administrations' current economic viewpoint and forecast. He cited the deficit, the crisis in Greece and oil prices as challenges. Administration economists are focused on staying engaged and optimistic. They also described several initiatives and facts: the world's largest photovoltaic plant and the world's largest wind farm are both in the US. (I thought they were in China.)
Mr. Daley spoke about deficit reduction plans (as he would, since he is currently negotiating with the Republicans) and about jobs.
Overall, I though the effort a good one. We, for the sake of the country, wish them well.
at June 17, 2011

We attended the Technology Commercialization Showcase for Women & Minorities this morning, June 8, 2011, at the University of Maryland, College Park.
The event was sponsored by IWIF: "IWIF Workers’ Compensation Insurance has specialized in providing workers’ compensation insurance to Maryland businesses since 1914." IWIF opened the Showcase with a brief introduction about itself and its core business.
Dr. Robert L. Wallace delivered a 30-minute lecture on utilizing strategic partnerships for commercialization success in technology and outlined 12 steps to building a good partnership:
1. Building trust
2. Get your "mogo" working ( mogo means: mission, objectives, goals, opportunity);
3. Maximize client pain IQ;
4. Know thyself ( limitation, strength and value);
5. Know thy partner;
6. 360 review;
7. Embracing the boulder;
8. Determine the alpha project;
9. Remaining independent;
10. Embracing the porcupine;
11. Joint venture continuum;
12. Transition strategies.
Dr. Wallace "co chairs the Commerce Committee for the Maryland/Liberia Sister State Agreement and serves on numerous boards, including the Baltimore Workforce Investment Board, the Tech Council of Maryland, the Kennedy Krieger Institute, and the Baltimore Center Stage Playhouse."
Four panelists gave short presentations about technology transfer. The Showcase ended with a discussion of success stories.
Overall, we found the event very useful and interesting. It opened our minds and generated many ideas about the application of technology in business.
Yuxi Song, Xiaoxiao Yin, CIR Interns and MBA Candidates, 2012, American University Kogod Business School.
at June 08, 2011

Email ThisBlogThis!Share to TwitterShare to FacebookShare to Pinterest
Labels: Technology Commercialization Showcase for Women and Minorities

Commentary: New law a boon for women- and minority-owned firms

"This may be the best time in recent memory to be a minority- or woman-owned contractor seeking to do business with the federal government."

(Actually, I think I would dial that back a little. With concern over government spending growing, it looks like women and minority firms may be getting to the party just as the food and beverages are running out...unless they are defense contractors.)

"A recent article in Capital Business [“Federal Reserve Bank seeks diversity in contractor pool,” May 16] discussed efforts by the Federal Reserve Bank of Richmond to increase contracting with women- and minority-owned firms. This effort is far broader and more significant than the article indicated, however.

Section 342 of the recently enacted Dodd-Frank Act requires nearly 30 agencies that oversee the financial system, including the Federal Reserve, the Treasury Department and the Federal Deposit Insurance Corp., to establish offices of minority and women inclusion to monitor diversity within their ranks and the pool of contractors who provide goods and services to the government.

(Actually, I would word this differently now. Financial institutions will be motivated by marketplace pressures related to a customer base that is increasingly diverse, not by government pressure...)

"The government has yet to determine what the penalties will be for financial institutions that fall short of diversity standards. I suspect it mostly will be shame. The bad list will get wide publicity. Financial institutions’ customer bases are more diverse than they were 20 or 30 years ago, and they don’t want to be seen as lacking a sufficient number of minority and women employees and contractors. Being on the bad list will cost them shareholder value and hurt their ability to recruit and retain employees. No one wants to work for a firm that doesn’t get it.

My opinion is that firms that fall short should be fined. I don’t think that will happen but a fine would impact their long-term behavior."

(Again, to reword slightly, fines are probably not realistic. A more likely penalty will be the loss of contracting opportunities for firms that consistently break the law...)

"Section 342 simply aims to bring players with differing backgrounds into the government contracting marketplace. As businesses compete for contracts, they will provide better goods and services at lower cost.

The effort will be good for women and minority contractors and the government. More competition, ultimately, will save the government — and taxpayers — money."

For the full article, see: