Showing posts with the label 1921 Tulsa Race Massacre
Show all 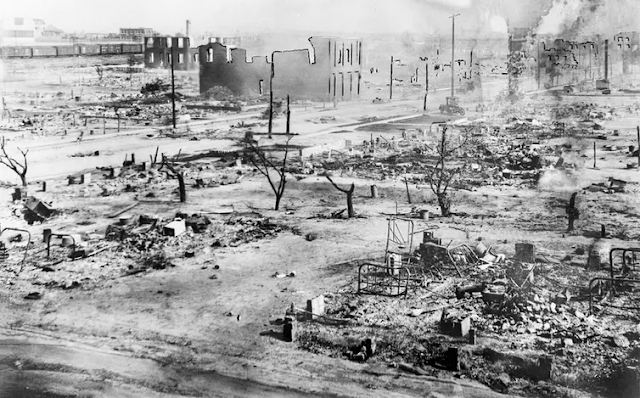 The end of May, 2021 marks the 100th anniversary of the 1921 Tulsa Race Massacre. On May 31st and June 1st, 1921, the Greenwood district of Tulsa experienced what remains known as the worst incident of racial violence in U.S history.  A predominantly black neighborhood, the Greenwood District, also known as Black Wall Street, was the center for many thriving black business owners and prosperity of black wealth. The massacre took place after tensions in the city rose following an incident in an elevator  involving a young black man, Dick Rowland, and a young white woman, Sarah Page. The following day Rowland was arrested, and a white mob converged on the Greenwood District.  This historic event is personal to me as I am a white student who grew up in the public-school systems of Tulsa. I was never taught the history of my city. It was introduced to me after I moved away from Tulsa. It was a new history teacher who finally taught my class the Tulsa Race Riots while I was in high school
Read more
More posts