The 2017 Tax Cuts and Jobs Act (TCJA) provided new tax incentives for investments made through qualified Opportunity Funds in targeted communities around the United States. These tax advantaged investment areas, known as Opportunity Zones (OZs), were authorized to promote economic development in 8700 disadvantaged communities, selected by state governors and certified by the United States Treasury Department. The rationale behind OZs is simple: giving tax breaks to investors will spur economic growth in impoverished communities. However, it is important to consider the context in which this program was created. The TCJA was passed by a Republican House, Senate, and President. OZs are not a new idea and they have been tried and tested by conservatives for decades, as in Margaret Thatcher’s “enterprise zones.” Versions of OZs were then adopted in the United States at the state level, ultimately culminating in the 2017 TCJA. However, as uplifting as the OZ program seems on its face, it is just another tax break for the wealthiest Americans that has caused real estate prices in disadvantaged communities to skyrocket and has left our most vulnerable citizens worse off. 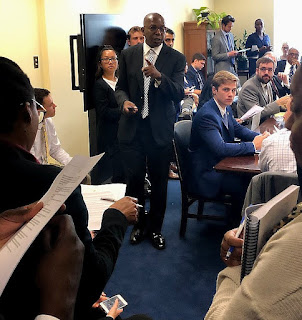 Mr. Kimble opened the briefing by highlighting the main problems OZs present. He asserted that, at the end of the day, OZs never get to people in need. Additionally, he demonstrated the lack of accountability and inclusion in OZs. Mr. Kimble also highlighted the fact, reiterated by many other panelists, that OZs must be comprised of smaller investments to bring true benefits to poor communities. Mr. Kimble pushed for a bill to require OZ Funds to be comprised of 40% of investments under $200,000, be diverse, and include a board of community members.

He eloquently stated that there are three evils in society: racism, poverty, and militarism. Through this lens, Dr. Steele expanded his analysis to the recent Poor People’s Campaign and discussed how OZs may be just another effort that has failed to address poverty meaningfully.

Joe Milam of AngelSpan was next to speak. In contrast to Dr. Steele’s broad and sweeping discussion, Mr. Milam engaged in a policy-heavy discussion. He asserted that even though there are clear issues with OZs, there are still existing fiscal policies that could make up for the program’s shortfall. Among these polices, Mr. Milam mentioned Qualified Small Business Treatment and specific sections of the US Code (1202, 1204, and 1245) that pertained to these issues.

The discussion then shifted to Claiborne Booker of Quadrivium. Mr. Booker affirmed the problems generated by an extreme concentration of wealth. Mr. Booker compared the OZ program to the New Market Tax Credit program and concluded that, with the current focus of OZs on large scale investments, benefits will be realized by those with large quantities of capital at the expense of the 8700 targeted communities across the country.

This sentiment was echoed by many panelists throughout the briefing. Large scale investments, especially in OZs, do little to help the communities in which they are deployed. Moreover, OZs scaled to large investments allow those with vast capital gains to increase their wealth, exacerbates inequality, and siphon profits from very communities the OZ program was purported to help.

This point was clearly demonstrated by the next panelist,  LaJuanna Russell of Business Management Associates. Ms. Russell started her analysis of OZs with a deeply moving personal story. She discussed the myth most people have about OZs: that they were created to help people in disadvantaged communities realize the American Dream. On its face, a tool of upward mobility, Ms. Russell quickly dispelled this myth when she described how she was unable to secure the OZ funding she needed to make ends meet upon the illness of a family member. After her story, Ms. Russell asserted that to pursue the American Dream one needs education just as much as they need access to capital.

The last panelist to speak at the briefing was William Michael Cunningham of Creative Investment Research. Mr. Cunningham has been a tireless advocate of disadvantaged communities in our nation’s capital and has been on the forefront of providing council to minority- and women-owned businesses and banks. Mr. Cunningham first highlighted the major issues in OZs, including how they are a potential $6 trillion tax break for a disproportionate amount of white, wealthy individuals and businesses and how they have done more to hurt the communities they were designed to help.

Mr. Cunningham provided a detailed analysis of how initial investments under the OZ program are sold as fair and positive economic growth without attention to consequences of the program’s current structure. However, instead of uplifting impoverished communities, OZs have been implemented as if minority populations will stay put despite skyrocketing real estate prices. Mr. Cunningham provided examples of how this process has occurred on the micro level both in Washington, D.C. and Ferguson, MO. To address the current flaws in OZs, Mr. Cunningham proposed capping capital gains to participate in the program, requiring OZ recipients to crowdfund from community members so they can share in the growth, and reporting social impact of OZ investments using the ethereum block chain technology. Since the 2017 TCJA, Creative Investment Research has offered guidance and classes on how minority- and women-owned businesses can best utilize the OZ program to their advantage. Although the OZ program has many flaws, it is one of the only existing source of funds for struggling communities and therefore must be utilized to one day realize a truly just economy.