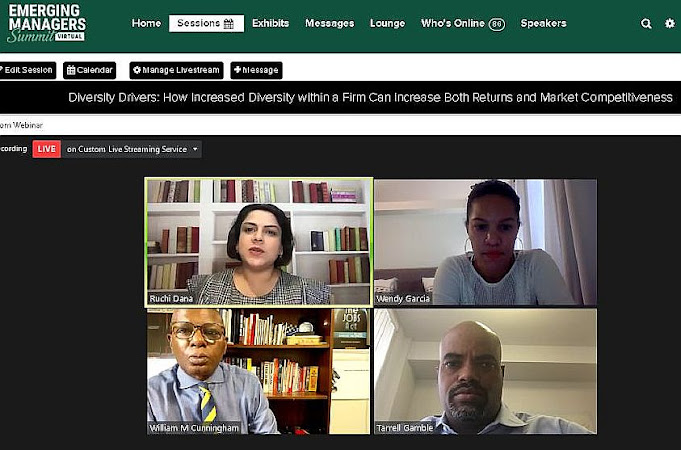 In a discussion led by William Michael Cunningham, Mr. Tarrell Gamble, Ms. Wendy Garcia, and Dr. Ruchi Dana spoke about their experience with diversity within the investment management business sector.

Dr. Dana also noted that gender diversity is an important starting point when considering balanced executive boards. She stated that female consumers make up $20 trillion of consumer spending. This is larger than the GDP of both India and China combined. Therefore, Dr. Dana notes, it is important to have women on corporate boards who understand this perspective. She finished with noting that "In a society where firms are mainly white male owned, there exist many systemic barriers. When looking to hire investment consultants, firms must also be conscious of the language they use to refer to their employees."

To summarize the comments mentioned above, it is not only important to hire women in investment firms but to also have them on corporate and executive boards. Having multiple genders making decisions leads to more inclusive populations being considered. Different experiences would be also be considered and there would be more perspectives within the decision making process. California is one of the few states that, by law, encourages gender diversity within the corporate boards. While this may be a good first step in the right direction, enforcing this policy has proven difficult.

Mr. Gamble mentioned Proposition 209 which prohibits consideration of race, sex, gender, nationality, and ethnicity when hiring individuals within California. While the proposition might be seen by some as a good thing and a way to discourage prioritizing certain groups, it also hinders groups who, because of intentional discrimination, qualify for this assistance. This remains problematic in California, a state that is "majority minority", with a population that is 30% Hispanic, 15% African American, and 10% Asian.

While gender equality is an important concern, racial equality remains an issue within many companies. With systemic racism so persistent in society, it is difficult to pinpoint on a set number of things to do to remove all racial and gender focused barriers. However, one of the starting points, as explained by Mr. Gamble, Mr. Garcia, and Dr. Dana, is to modify investment management contract language. To diversify contract language is to make these contracts more applicable to a wider audience.

The panel noted that certain investment funds have been designed to be set aside for minorities and women who, because of systemic racial and gender discrimination, need assistance in rising up in the investment management business hierarchy. As these opportunities are often unequal, specially designated pools of investment funds may help remove unfair outside competition and offer a space for growth.

Some on the panel suggested that, in order to engage the new generation, it is important to tackle these inequalities now. One tool that was discussed is the creation, within corporations and funds, of the Chief Diversity Officer (CDO).  Where this position reports within the organization was also determined to be important. The panel noted that, when the CDO reports to the CEO, more impactful diversity outcomes can be expected, relative to a CDO who may work within a Human Resources Department. The panel concluded that the younger generation needs role models who have this diversity activist mindset. Not only is it important to include minorities and women, we must have white individuals who are willing to speak up and help.
at September 26, 2020