Showing posts with the label special drawing rights
Show all 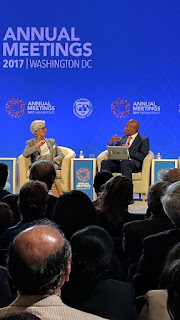 The emergence of blockchain technology and cryptocurrency creates potential threats, but also opportunities for the world’s central banks. We noticed a pivot toward greater discussion of blockchain at the IMF and World Bank meetings we attended in early October as central bankers, financial institutions and policymakers took note of these developments. Cryptocurrencies do not require an intermediary to verify and oversee transactions, allowing transactions to bypass the current monetary system overseen by central banks using fiat currencies. In their official capacities as international organizations seeking coordinated and stable monetary policy, the International Monetary Fund and the World Bank recognize the potential of blockchain technology and both have taken significant steps in this fintech space. Christine Lagarde, managing director of the IMF, suggested the creation of a digital currency based on the special drawing rights, a basket of international reserve currenci
Read more
More posts