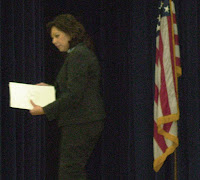 On Friday, February 25th, we attended the White House Policy Briefing on Jobs and the Economic Future in Communities of Color sponsored by Michael Blake in the Office of Public Engagement. The meeting was held at the Eisenhower Building. Speaking were:

3. Marie Johns, Deputy Administrator, SBA. Ms. Johns described plans for the Impact Fund: "SBA will commit $1 billion to those funds that invest growth capital in companies located in underserved communities. This includes investing in economically distressed areas, as well as those companies in emerging sectors such as clean energy. SBA will provide up to a 2:1 match to private capital raised by these funds, partnering with private investors to target these 'impact' investments."

The briefing was informative and well timed. The Office of Engagement announced that they are having a series of meetings around the country (including one on Monday in Philadelphia) to reach out to small businesses, especially small minority businesses. Overall, we like the Administration's forward thinking, forward leaning efforts in this area. Very well done.

"A long standing bank in North Tulsa is no more. Many say the closing of American State Bank is an end of an era.

Leroy Thomas had a front row seat to a moment that was truly ground breaking. "We were very excited. "It was quite the momentous occasion," Thomas told News Channel 8. He founded American State Bank in 1970. A crowd gathered to witness it's rebirth in it's new home on 38th North Peoria just seven years after it was founded. "It was a source of pride. There was no other institution in the state, financial institution controlled by blacks that in itself was an achievement we thought".

Thomas says he sold his interest in the bank in the 90s, but the bank still operated in the place he built. Until this week, it was still the only remaining black owned financial institution in Tulsa. Now a notice on the front door is directing customers to People's bank.

Edna Brooks worked at American State Bank for 15 years. She retired a few years ago. "They had talked about selling the bank for many years and after a while we just didn't think it was going to happen. I was really shocked that our only bank for the north side, the minority bank was gone," Brooks said. She'd hoped that someone else in the community would come in and to keep the north side location open. "You come so far. We had all of these when they the race riots. We had banks we had stores, everything we needed doctors lawyers, whatever". Now only memories remain. "Very sad. Very sad. An awful lot of work went into that," Thomas said.

There's no official word on what will happen to the current building, but there is some talk the bank could become a church."
at February 18, 2011

Learn more about new business and professional opportunities that may become available in 29 federal financial agencies like the nine (9) Federal Reserve Banks, the FDIC, etc. On January 22nd, each of the affected federal financial agencies established new offices devoted to ensuring minorities and women businesses are included in contracting opportunities. Moreover, these offices are still staffing up; therefore, professional opportunities also exist. The Dodd-Frank legislation that became law in the summer of 2010 include these provisions. Attend the Thursday, February 17th Chicago Booth Black Alumni Association's evening program event in Washington, DC to learn more!