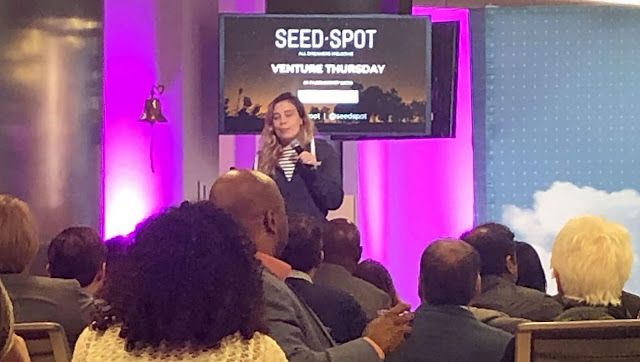 Booz Allen Hamilton was gracious enough to host 2019’s DC Venture Thursdays sponsored by Seed Spot, an organization supporting entrepreneurs making a societal impact. Seed Spot helps by providing mentors, capital, and other resources needed to succeed. The March 21 event was the final pitch practice for the entrepreneurs participating in the program. Each was given three minutes to summarize their product or service. Booz Allen Hamilton, a leading business and technology consulting firm, was the perfect place to hold the event, with a space that resembled more of an incubator than a consulting office. There was coffee on draft, pizza, and beer available for all participants, giving the high-pressure event a more laid back feel, and the location was stuffed with virtual reality gear connected to large monitors.


Nine entrepreneurs were given a shot to impress the audience, who were then able to ask biting questions to the entrepreneurs themselves on the spot. Of the nine startups, I noticed a pattern develop. Seed Spot makes no attempt to hide its focus on diversity and inclusion, and that was on full display among the entrepreneurs selected. Six out of the nine were women. Half of those were American ethnic minorities, from a Pakistani woman to a handful of African American women. Their ideas reflected this diverse background. Meher Rehman, from Pakistan, focused on a striking problem in Pakistan that has also affected many Western countries - discrimination against women, particularly in the workforce. Ms. Rehman indicated that there are thousands of highly qualified, degree holding women in Pakistan who cannot find employment, especially in the technology field in which they have been trained. Her start-up attempts to solve that problem by creating an app that connects these women to employers specifically looking to diversify their workforce. It must be noted, these women are not being hired just because they are women; the app ensures that applicants are completely qualified for each position.

The focus on impact did not end there. The African American women who presented were all in the business of creating startups that dialed in on their group. The startups presented included an all-encompassing finance app and a startup focused on training in order to get more African American women in upper management. Many of these ideas have already been put into practice by other entrepreneurs, but the niche these women are targeting is the part of the market that only caters to  specific groups, like African American women in need of financial services, and then builds their program around maximizing benefits to this demographic before expanding to the general marketplace.

Of the startups presenting, one of my personal favorites was an app called Goodfynd by Kyle Miller. The app is to make it easier for food-seekers to find and pay food truck owners. There are over 400 food trucks in DC alone, so this app has the potential to streamline the process of finding the truck you want most, seeing their menus, and paying for your meal. As someone who nearly exclusively gets food from stores that have a mobile ordering app, this could be a great benefit to my arsenal, since I love the cuisine that food trucks offer, but it hasn’t been worth the time or hassle in finding them.

But, out of all the startups, if I had only one to invest in to maximize my returns, it would be Haven by Ben Pugh. Haven is a sleek and user friendly app (designed to feel like using Instagram) that quickly clarifies complex health insurance plans, bringing users the information they need as to what they can and cannot do with their insurance without spending hours researching this information. Simply put your data in the app, and thirty seconds later, you are told all of your healthcare options. In an age where so many are constantly connected to their phones and are app crazy, a simple, easy to use app which provides a great personal and social benefit to nearly everyone has the ability to take off. Ben also answered all the erudite questions from the audience without a moment of hesitation. He got my vote for best of show.
at March 26, 2019