According to news reports, "The Congressional Black Caucus Foundation, Inc. (CBCF)..(made a) $5 million (deposit) in African-American banking institutions as part of a broader effort to increase the availability of loans for businesses and individuals in African-American communities. In all, five banks will receive $1 million each" in deposits. The Foundation, "established in 1976, is a non-partisan, non-profit, public policy, research and educational institute intended to broaden and elevate the influence of African Americans in the political, legislative and public policy arenas." 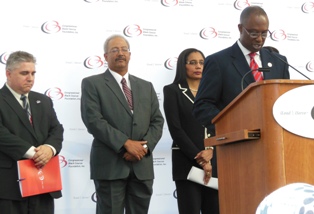 All in all, a good move. This is modeled on efforts we spearheaded over 20 years ago: