Showing posts with the label Humphrey Hawkins
Show all 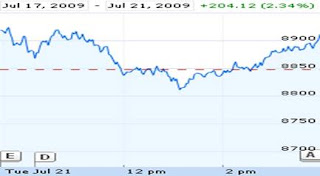 On July 21st , Federal Reserve Chairman Ben Bernanke testifies before the Full committee of the House Financial Services Committee for his semiannual Humphrey Hawkins Hearing on Monetary Policy. Mr. Bernanke’s testimony is summarized as follows and copy of the written statement is available on the committee’s web site at: http://www.house.gov/apps/list/hearing/financialsvcs_dem/fchr_072109.shtml Mr. Bernanke’s early responses to the Wall Street Journal (wsj) were cited by Barney Frank (D., Mass.), the Committee’s chairman as his opening statement. Mr. Bernanke’s quotes on the WSJ also became some of the lawmakers concerns. Expansion of GAO audit According to the WSJ’s article “ Bernanke Heads to Congress Battling Calls to Tame the Fed ”, Mr. Bernanke strongly opposed the proposal to audit the Fed, calling it "self-defeating and dangerous." He said that the risk is that if investors see the Fed facing new political oversight, they will doubt its ability to take unpopular
Read more
More posts