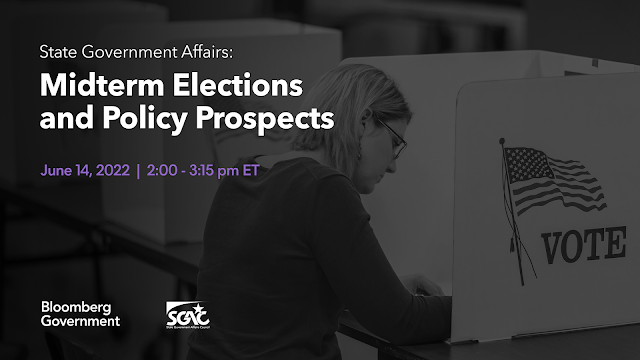 Bloomberg Government recently wrapped up an event which discussed everything from the upcoming 2022 mid-term elections to the potential policy goals that will either affect or are affected by the current political environment. The primary focus of the first panel was to forecast what will occur in the mid-terms. The overwhelming consensus of the panel was that 2022 will be a favorable year for Republican candidates on the ballot throughout the country. There are a few key reasons for why this is likely to be the case. The fact that this there is a Democrat currently in the White House, Joe Biden, and a Democratic controlled House and Senate puts the Democrats at an immediate disadvantage for 2022. Historically, the party in power typically suffers losses in the mid-terms, with the presidential party losing an average of 26 seats in the House. Combining this with Biden’s low approval ratings, the rise of inflation, and Republican desires to run on immigration and crime, the Democrats have a minimal chance of maintaining control of the House of Representatives going into the next session of Congress.

The one place in which Democrats have hope for retaining their majority is in the Senate. This is because the seats that are up for re-election are relatively favorable to them, whereas in the House all 435 seats are up every two years. In 2022, there are 35 of the 100 senate seats which are up for re-election, with Republicans defending 21 and Democrats only defending 14. Most of these seats are not at risk of flipping parties, with current Democratic seats in Nevada, Arizona, Georgia, and New Hampshire, and Republican seats in Pennsylvania and Wisconsin being the primary battle ground areas. Because of the current 50-50 split in the Senate, control of the chamber after the 2022 elections remains uncertain, with Democrats feeling better about their chances here then in the House.

Another topic discussed during this event were state level policy priorities going into the 2023 Legislative sessions. These priorities were largely divided into seven categories: money, infrastructure, health, workforce/labor, criminal justice, education, and elections. When it comes to the issue of infrastructure, the 2021 Infrastructure Investment and Jobs Act provided states with $1.2 trillion to address issues such as transportation, water, energy, and broadband. Because this was a onetime payment, many of these issues will continue to linger in the upcoming years and legislative sessions.

Another issue that has become very prevalent at the state level is election reform. After the 2020 election, former President Donald Trump, and his allies, started spreading “the big lie” that the election was stolen from him. Because of this, many state legislatures that are controlled by Republicans, such as Texas and Georgia, have begun to draft and enforce bills that make it more difficult for people to vote, with provisions such as closing polling places early and more forcefully punishing people for mistakes in their voter registration. Many national Democrats attempted to enforce federal voting laws that would invalidate these state level laws. But, due to their slim majorities in the House and Senate, Democrats have been unable to pass federal legislation.