More Fortune 500 companies are located in Texas than in any other state. Texas successfully used low taxes and minimal regulations as bait to recruit companies like Tesla and Oracle. The state promoted these “advantages” in ads highlighting their “free-market” environment and criticizing the "tax and spend policies of liberal leadership" in Democrat-run states. Four million people migrated to Texas over the past ten years. Our economic models predict a reversal, however.

State of Texas corporations on the Fortune 1000 list generate $2.2 trillion in revenue, $158 billion in profit. They have a market value of $3.8 trillion and employ 2.5 million people nationwide.

We continue to believe this increased corporate presence in Texas imposes a tax on the nation as a whole. Texas allows anyone 21 or older to carry handguns without training or licenses, and maintains lower gun purchase age limits. Beyond the recent abortion bill, which allows people to sue those who "aid and abet" an abortion and receive at least $10,000 in successful cases, the state also blocked public schools from requiring masks, taxing healthcare systems nationwide.

These policies are a hidden tax on both the wellbeing and the actual finances of US citizens, imposed by a single state. The national monetary impacts are real - “schools spend hundreds of millions of dollars on security, building reinforcements, trainings and drills, and the federal government spends more millions for campus officers. To accommodate them, municipalities across the country spend a fortune on police and equipment..” Recent events show the ineffectiveness of these expenditures.

Changes in the social environment do not bode well for the state. School shootings have increased and are unfortunately predicted to continue, given lax gun laws in the State. These will have an increasingly negative impact on Texas corporations, businesses and groups.

We believe growing in-state gun violence leads to elevated levels of anxiety on the part of employees. This increased level of concern will negatively impact productivity. Many employees will be more often focused on the safety of their children than employees in other states. 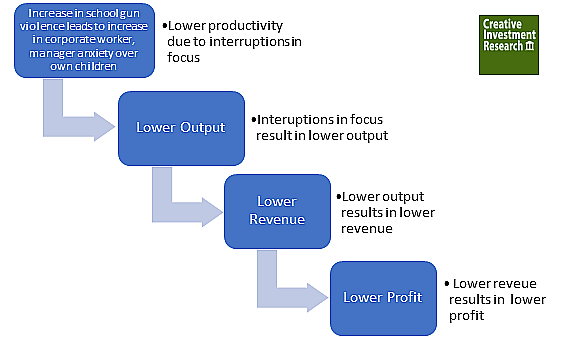 This will cause interruptions in concentration. These distractions impact workers and managers, even if sporadically, resulting in lower corporate output. Lower output levels lead to lower profits, other things equal, relative to corporate headquarters located outside of the state.

Corporate Social Responsibility (CSR) mandates that companies understand the impact they have on all aspects of society, including economic, social, and environmental (ESG) impacts. “To engage in CSR means that, in the ordinary course of business, a company is operating in ways that enhance society and the environment instead of contributing negatively to them.”

Corporations headquartered in Texas who do not oppose lax gun laws will, under CSR, be tied to the “racism, anti-immigration hatred, misogyny, war imagery, neo-Confederate fantasies, and cartoonishly vile versions of masculinity” that Texas gun laws facilitate. Given the fact that these positions are contrary to the desires of most Americans, they will also be tied to an anti-democratic desire for minority rule, and the desire to eliminate voting rights and the rights of “women, immigrants, Black people, queer people, trans people – all of whom have been targeted by mass shootings in recent years.”

Other CSR and ESG factors, including international issues, a reevaluation of the value of fossil fuels, and increased domestic political instability, will also lead to Texas being a less attractive destination for corporations over the years.

We will provide our estimate of the dollar value of this gun related revenue and profit loss in the coming weeks.