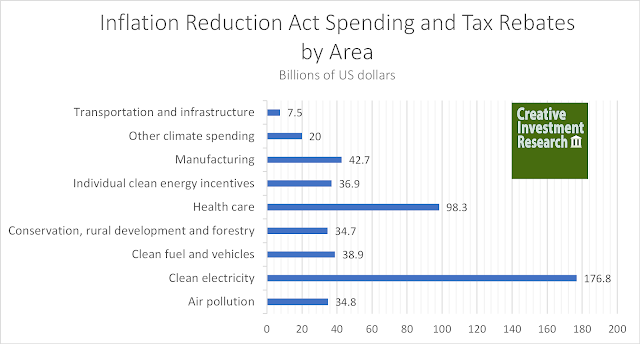 The Inflation Reduction Act of 2022 (IRA) is a law passed by the 117th United States Congress in August 2022. It "includes a first-time provision that would allow the U.S. Department of Health and Human Services to negotiate prices of certain prescription drugs in Medicare and Medicaid. Savings would be generated by requiring drug manufacturers to pay a rebate for drugs whose prices increase faster than inflation under Medicare, and would create several reforms in the Medicare drug program, also known as Part D, including a cap on out-of-pocket drug spending for seniors beginning in 2025. It also extends by three years the expanded and enhanced Affordable Care Act tax credit ahead of planned premium increases set to take effect in 2023."

We estimate the impact on the African American community to be significant, on the order of 8% of the total. (For a detailed analysis, email info@creativeinvest.com). 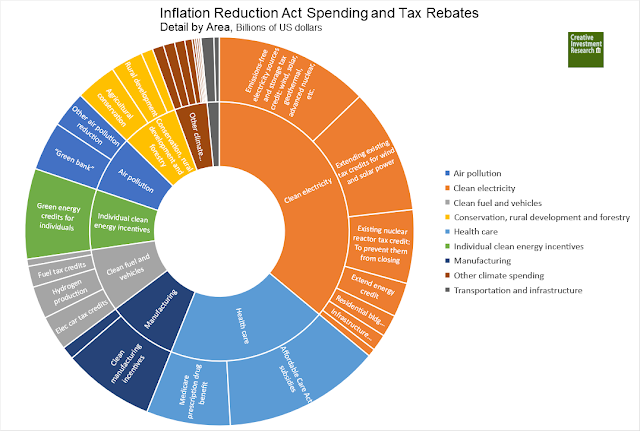 The law's climate provisions consist of "subsidies for energy that does not emit any carbon, like solar, wind and nuclear power" and "provides funding – nearly $369 billion in direct investment to ensure energy security, reduce carbon emissions, increase energy innovation and support environmental justice objectives with direct support for underserved communities. It will allow for the deployment of low carbon energy technologies while ensuring the president's objective to create good-paying jobs and on-shoring domestic manufacturing are met" – while seeking to reduce carbon emissions by an estimated 40 percent by 2030. One newspaper claimed that "the subsidies will reduce the prices of electric vehicles, solar panels, heat pumps and other energy-efficient home improvements." Consumers "claim the subsidies through tax filings; as a separate rebate if you don’t file taxes; or, in some cases, immediately when you make a purchase." The life span for many of the energy tax incentives is 10 years. 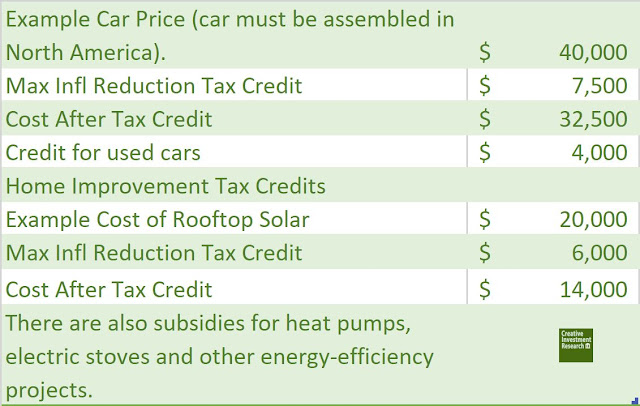 The law revises the tax code to create what is claimed to be "a technology-neutral approach to incentivize the deployment of low carbon technologies. Finally, there are a number of provisions included to support conventional energy development in the United States."

The largest single investment across the climate title of IRA is in the Greenhouse Gas Reduction Fund, a clean energy and sustainability accelerator funded at $27 billion with at least 60 percent of those funds focused on disadvantaged communities. The funding is provided to non-federal governments, as well as state or regional green banks. 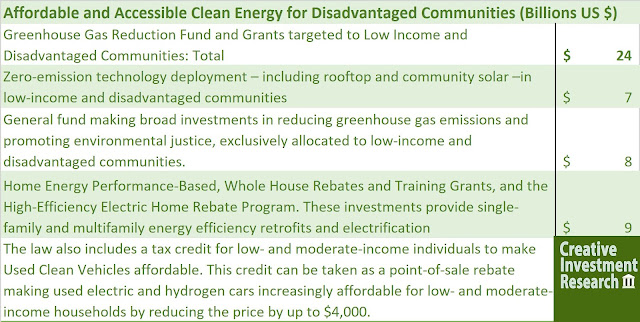 The IRA "raises revenue with a few, but significant, changes to the tax code. This includes an alternative minimum tax on corporations, an excise tax on stock-buy backs, reinstating the Superfund tax on petroleum and oil, and increasing funding to the Internal Revenue Service" The law "does not contain sweeping tax provisions aimed at increasing taxes on individuals."

Additionally, the agreement calls for improving the federal permitting process (permitting reform) targeting major infrastructure projects. The law requires permitting reform legislation to be passed before the end of the fiscal year, seen as essential to unlocking domestic energy and transmission projects, which will lower costs for consumers and help meet long-term emissions goals. 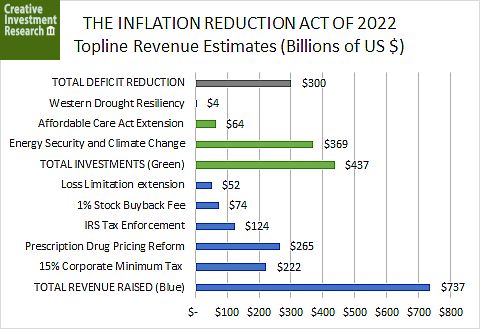 o Office of Management and Budget

US Treasury Secretary Janet Yellen directed that new funding to the Internal Revenue Service will not be used to raise audit rates for Americans making under $400,000 a year. There are no new taxes on families making $400,000 or less and no new taxes on small businesses – the bill closes tax loopholes and enforces the tax code.