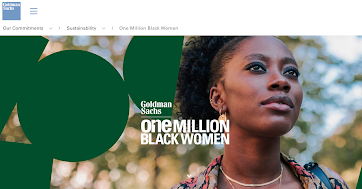 Goldman Sachs announced the launch of One Million Black Women, a $10 billion investing initiative focused on narrowing opportunity gaps for one million Black women. In reviewing the program, we focus on potential program effectiveness. We also review possible social impact.

Goldman Sachs, a banking organization headquartered in New York, has a reputation for political savvy. Many economic policymakers in the Trump, Obama, Bush and Clinton Administrations, from Treasury Secretary to National Economic Committee chairs have been former Goldman employees. (While the Biden Administrations seems to have limited the number of ex-Goldman employees on staff, they are still present - SEC nominee Gary Gensler, for example.) The bank is also known for rushing to change from investment to commercial banking registration days before the financial crisis of 2008 took root.

The firm has pledged to invest $10 billion in Black women led companies and initiatives over the next ten years.

Goldman created an "Advisory Board" of Black women and men to provide opinions on managing the program.

Goldman probably sources funds for the program from internal and external sources.

Given the sourcing and the timing, we rate this program as having limited actual impact (D) and utility (D).

As with Community Reinvestment Act (CRA) commitments, Goldman's pledge is subject to change depending on business and economic conditions, is not legally binding, and can be modified or cancelled at any point.

The role and power of the Advisory Board is unclear: our experience suggests this power is likely limited. Further, the Advisory Board is comprised of individuals (with a few exceptions) having limited track records for positive impact on the Black community beyond the symbolic. (A better set of advisors  might have been the three Black women who created Black Lives Matter.) We understand Goldman's reluctance to deal with actual innovators, however, having experience with prior efforts Black groups have made to work with the firm, specifically Goldman's Urban Investment Group.

External funding sources are likely one of the many government and Federal Reserve liquidity programs. This means Goldman can fund this effort at very low interest rates, which it will then make available to Black women at elevated levels.

In conjunction with the announcement, Goldman released an economic study titled "Blackwomenomics." (See our website: https://blackwomenomics.com/).

On April 11, 2016, the Department of Justice announced that Goldman Sachs “agreed to Pay More than $5 Billion in Connection with Its Sale of Residential Mortgage Backed Securities.”

More recently, on October 22, 2020, the firm "agreed to pay nearly $3bn (£2.3bn) to end a probe of its role in the 1MDB corruption scandal. The bank's Malaysian subsidiary also admitted in US court that it had paid more than $1bn in bribes to win work raising money for the Malaysian state-owned wealth fund."

As noted, several former economic policymakers have been Goldman alums. Thus, the firm must bear some responsibility for the failure of economic policy in those years to address both racial discrimination and inequality

These factors reduce the likely impact of the effort.

Our 2017 Investment Advice for Black Women

The announced $10 billion dollar "investment" equals, for each of one million Black women, $10,000.

To maximize social and financial impact, we suggest the firm give each woman $10,000 in Bitcoin today, as we suggested in 2017 to several groups of Black women. (A $10,000 investment made then would now be worth $600,000.) This is a far more honest, ethical and potentially impactful strategy.

Rating Justification
As we stated in our 2019 talk before the Congressional Black Caucus (below), the fate of Black economic development rests in the hands of Black women. We have calculated the impact coefficient of this demographic to be significant. Thus, any efforts to address this group will have an elevated impact on the Black community overall. Putting a significant effort in this area into the hands of an organization that is ethically and ethnically suspect, with a proven track record of damaging Black economic interests, is inappropriate.
We have determined that the projected impact coefficient from Goldman is low, given the firm's prior performance in the Black community and in the marketplace overall. Accepting such an effort on face value, without critical review, is foolish. See our comments below on the gap in entrepreneurial activity and the role of Black women for more information on our rating.

April 11, 2021
Cryptocurrencies surged in popularity recently due to their decentralized nature, transaction speed, and security. Governments around the world have taken note of this trend and are beginning to rollout nationally backed digital currencies. The first major nation to embark on this journey is China, which announced the Digital Yuan (DY). This federally controlled currency has the potential to disrupt modern financial structures and poses the largest threat to the US Dollar since the establishment of the Euro.  DY allows the Chinese government greater control over the production and circulation of currency. It also adds a means by which the Chinese government can efficiently and effectively transfer funds between citizens, banks, and government entities, all while cutting out the "middleman" in transactions.   Growing tired of a US dollar-driven world, China made a bold leap into the future, hoping to increase their global economic power. US officials have been quick to expre
Read more

August 09, 2021
According to the Intergovernmental Panel on Climate Change (IPCC), a group of United Nations (UN) scientists, "human activity is changing the climate in unprecedented and sometimes irreversible ways." The report "warns of increasingly extreme heatwaves, droughts and flooding, and a key temperature limit being broken in just over a decade."  The report's authors claim, that "it is unequivocal and indisputable that humans are warming the planet."  This is incorrect and reflects the lack of honesty in the discussion.  We stated, on February 5, 2015, in testimony to the Norwegian Ministry of Finance ( http://www.creativeinvest.com/NorwayTestimonyFeb52015.pdf ) and on April 22, 2015 in testimony to the Government of the United Kingdom ( https://www.creativeinvest.com/UKConsultationonChangestoInvestmentRegulationsApril222015.pdf ): "As the market value of environmental, social and governance factors continues to grow, companies and investment managers
Read more