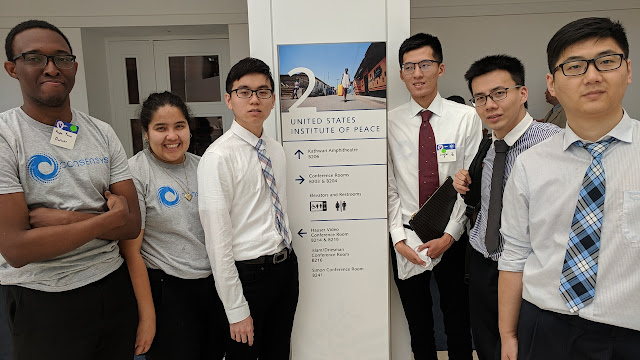 The conference clearly pointed to the future. Supranational development banks, like the World Bank and the Inter-American Development Bank, participated and shared their insights on the development of blockchain technology, especially interested in applying blockchain concepts, technology, and mindset to solve problems. Despite the conservative nature of these institutions, given their scale and leadership position in the finance industry, their general attitude with respect to blockchain is open and accepting.

Conference discussion panels provided an incentive for the small firms to learn, utilize and deploy  blockchain technology projects. Moreover, we saw many excellent applications, like Popchain, a decentralized token for anonymous surveys,  already in use. On a panel concerning blockchain and climate, a weather tracking program based on the blockchain was described. The app is in use on the African continent. By including the local people into the framework, the social impact of the application is maximized: on the one hand, the weather tracking organization gets data on the climate in a specific region; on the other hand, participants receive much needed financial support for their lives and help ensure the long-term sustainability of the program.

The conference also served as a great platform for facilitating connections between startups and  small firms. BSIC provided many workshops for small business owners to discuss and communicate their business idea. For example, during the MITx Solver workshop, professionals were divided into  health, education, sustainability sectors. In the process, professionals and startup owners were able to combine their ideas and develop mutually beneficial cooperative opportunities.

I have several reflections on the conference content. First, many of the entrepreneurs I talked to did not have any previous familiarity with blockchain technology. While there were many experts in the technology, like the World Bank's Chief Information Officer and those from Consensys, others knew nothing about blockchain or were new to the technology. Second, based on  reflections I gathered from students attending (from George Washington University, Georgetown, Johns Hopkins and Howard) the discussions at the conference remained at an introductory level. Instead of breaking down technological difficulties, most discussions were on concepts and ideas.

Nevertheless, this conference is meaningful for the development of blockchain technology. As a political center, the headquarters of various large financial and political institutions, D.C needs its own blockchain "geek hub" that enables D.C entrepreneurs to benefit from the blessings sure to flow from this advancing technology.
at June 06, 2018