The Problem with OneUnited and #BankBlack 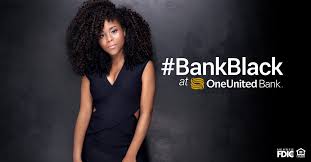 According to the New York Times,

"WASHINGTON — Top banking regulators were taken aback..when a California congresswoman helped set up a meeting in which the chief executive of a bank with financial ties to her family asked them for up to $50 million in special bailout funds, Treasury officials said.

Representative Maxine Waters, Democrat of California, requested the September meeting on behalf of executives at OneUnited, one of the nation’s largest black-owned banks. Ms. Water’s husband, Sidney Williams, had served on the bank’s board of directors until early last year and has owned at least $250,000 in stock in the institution. Treasury officials said the session with nearly a dozen senior banking regulators had been intended to allow minority-owned banks and their trade association to discuss the losses they had incurred from the federal takeover of Fannie Mae and Freddie Mac. But Kevin Cohee, OneUnited’s chief executive, instead seized the opportunity to plead for special assistance for his bank, federal officials said."

And then, there's this:

OneUnited “bought or leased luxury real estate the CEO used and, until federal regulators complained in 2008, paid for his Porsche. Cohee's East Coast spread was an $880,000 condominium on Miami Beach's Ocean Drive, and out west the bank leased a $26,500-a-month mansion for him on Palisades Beach Road in Santa Monica, Calif…he was twice arrested, on sexual assault and drug charges.”

Carver Federal, another Black owned bank, decided to attempt to help African Americans victimized by fraudulent subprime lending, something OneUnited failed to do. In addition, OneUnited went from making 74 multifamily loans in 2006 to making only 2 in 2007.

The Black community needs black banks, and no one argues with the material success of OneUnited's owners, but if they are going to be involved in the #BankBlack movement using service to low and moderate income communities as justification, OneUnited should be required to prove that they are, in fact, lending in low and moderate income communities. The record above shows otherwise.

We suggest the following:

Focus on other Black Banks like Liberty Bank in New Orleans, Citizens in Atlanta or Illinois Federal Savings and Loan. Based on an analysis of social impact, any black bank but OneUnited.